A hearty traditional Korean vegetarian stir-fry dish marinated with a soy and sesame oil sauce. This dish requires a little bit of patience, but you'll be awarded with amazing flavors.

Japchae (잡채) translates to mixed vegetables in Korean, and I recently learned that the dish originally contained no noodles. Surprisingly, the reason why so many people love this dish is because of how chewy the sweet potato noodles are compared to wheat noodles. The noodles soak up the marinade and make for a great base for the rest of the stir-fried vegetables. I recommend using a variety of vegetables to add colors to this dish!

Today, japchae dishes will typically have some type of meat, such as beef. In this vegetarian japchae, we will be subbing with shittake mushrooms marinated in a delightful soy sauce/sesame oil based sauce.

This dish can also be made vegan friendly by using Just Egg for the optional egg topping at the end.

What are Korean glass noodles?

The noodles used in japchae differ from wheat noodles as they are typically made from sweet potatoes or mung bean. The sweet potato noodles are called glass noodles because they become translucent when cooked. They are typically purchased dry, but become extremely chewy and springy after they are boiled. The noodles are great for both hot or cold dishes. Because there is no wheat flour in these noodles, these are also great for those who are gluten-free. To make this dish gluten-free, simply substitute tamari for the soy sauce.

You can find these noodles in any Asian grocery store or online.

You're free to use whatever vegetables you find hearty and delicious, but I'll be including vegetables that are typically found in japchae. Because the marinade is soy-sauced based, the noodles will be a light brown color, so using a variety of colors help to brighten up the dish

This dish will take quite a bit longer to prep and cook as there are a lot of vegetables to clean and slice. Then each vegetable is individually stir-fried to preserve their color.

However, you'll be able to make this into a large dish that's enough to feed 2 as a main course! 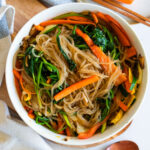 Hi, I'm J! I'm a marketer by day, food photographer and recipe-tester by any other time available. The Floured Camera was born from my need to make quick, delicious, and (sometimes) healthy dishes for when I'm craving my favorite Asian childhood dishes!